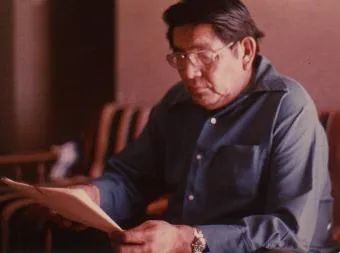 1. Mr. Knowshisgun and Mr. Shoulderblade listen to side 2 of tape.

3. Mr. Shoulderblade sings a traditioinal Cheyenne war dance song (not a Modern Omaha song). This is a scalp dance song, sung traditionally while the dancers re-enact a war event.

Nano'sevatamo [I am thinking of you.]

Tsestapav'nehe'eno [But when I knew her well, I found out]

Medicine Bird sings his song four times, each time with slight text differences as he remembers variants. He does not sing "verses".

Hetamehaeanamehosa'ehe [Maybe she loves me.]

Ho'eohoseto [Whatever you told me]

Neme'evavoho'oese [Why don't you get rid of me (throw me out.)]

This song was not clear enough to write completely;

Nesaaxovahesone (Something about a young man is not... I love him... the one I love)

(words unclear) But when they sense something wrong.]

Ehoevatseo'o [They all turn back]

Mr. Knowhisgun sings 5th song from Medicine Bird tape the way he learned it; 'Young woman, pass the whiskey carefully, you might drop it."

Recording made for archives at DKMC. Original Bullcoming recordings to go to OSU archives at Norman, OK. Medicine Bird recording is at DKMC archives.

Ted Risingsun and Sylvester Knowshiggun are friends from childhood. Their memory of songs and events is enhanced by talking together. Mr. Knowshisgun brought an eight-track player and an old commercial recording of Crow songs on an 8-track tape.

1. Information and history of Cheyenne hymns

2.Listening to James Medicine Bird tape and comments. This is continued from 425c.