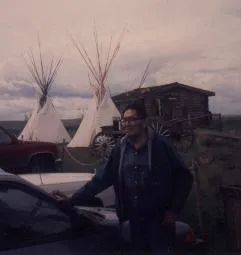 Ted Risingsun and Sylvester Knowshisgun are friends from childhood. Their memory of songs and events is enhanced by talking together. Mr. Knowshisgun brought an eight-track player to an old commericial recording of Crow songs on an 8-track tape.

4. song, apparently of signifiance amoung the Crow people

5. An old "push dance" song, from back when this genre originated near the last of the 19th century.

9. Other old grass dance songs are heard here, with comments interspersed. Most of these songs are from the Crow, some were shared and sung by both Crow and Cheyenne. The actual origin of these songs is unclear.

10. This was originally a Cheyenne enemy dance song, picked up and sung here by Crows.

14. Other old Crow songs, and conversation about an old building near Busby used for celebrations.

15. A Cheyenne song with special significance to Crow people.